MacKenzie was born in New Abbey, Dumfries in 1889 and enlisted in the Scots Guards on 16 February 1912. He embarked for France on 5 October 1914. He was 25 years old, and a private in the 2nd Battalion, Scots Guards, British Army during the First World War when the following deed took place for which he was awarded the VC.

On 19 December 1914 at Rouges Blancs, France, Private MacKenzie rescued a severely wounded man from the front of the German trenches under a very heavy fire and after a stretcher party had been compelled to abandon the attempt. Private MacKenzie was killed later on that day while trying to carry out a similar act.

Private MacKenzie has no known grave but his name is listed on panel 1 the Ploegsteert Memorial to the Missing in Berks Cemetery Extension near Ploegsteert in Hainaut, Belgium. There is a memorial tablet at Troqueer parish church, Dumfries. His Victoria Cross is displayed at The Guards Regimental Headquarters (Scots Guards RHQ), London, England. 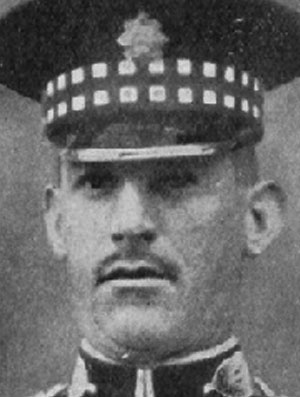 Buried: Remembered on the Ploegsteert Memorial