Having taken to heart the lessons of fighting the Boers, well equipped with European weapons, a much more skilled and organised enemy than any other encountered since the Crimean War, the British Army by 1914 was as well trained as it had ever previously been in peacetime. What it did not have was either sufficient manpower or artillery, in particular heavy guns, with sufficient amounts and types of ammunition for a major land war in Europe. The 1st Battalion went to France in August 1914 with the British Expeditionary Force and the 2nd Battalion landed in Belgium early in October. Both fought continuously till the Armistice on 11 November 1918, one or other being present at most of the battles of the first year of the War and in all those from after the Guards Division formed before Loos. Only the major Battle Honours, chosen by the Regiment, of the many awarded, are borne on the Colours. These are chronologically “RETREAT FROM MONS”, “MARNE, 1914” and “AISNE, 1914”, all 1st Battalion, “YPRES, 1914”, both, “FESTUBERT, 1915”, 2nd Battalion, “LOOS”, “SOMME, 1916”, “YPRES, 1917”, “CAMBRAI, 1917”, “SOMME, 1918”, “HINDENBURG LINE”, “CAMBRAI, 1918” and “FRANCE AND FLANDERS 1914-18”.

Way beyond all others the battle that most marked the Scots Guards was the First Battle of Ypres. The deaths recorded in the four weeks from 18 October 1914, to which must be added those who died of wounds later or as prisoners of war after being captured at Ypres, exceeded the total number of Scots Guardsmen who died in each of the years 1917 and 1918. The 2nd Battalion lost four men out of five and the 1st Battalion, even with several officers and over a hundred men in reinforcements during the battle, only had one captain, the quartermaster and seventy three men left. The story across the rest of the British infantry there was similar. A few weeks later, just before Christmas 1914, further south from Ypres the 2nd Battalion made an attack in the dark on the German trenches at Rouges Bancs in which there were very many casualties. Private James Mackenzie was posthumously awarded the VC for bringing in a wounded man from near the German line. In the same battle Lieutenant Geoffrey Ottley led his platoon out to take on a German machine gun which was causing great losses to the attacking companies in front. He was hit in the neck, fell, got up again and led his men on, falling again near the German line. He died three days later, a month short of his nineteenth birthday, and remains to this day the youngest ever winner of the DSO. The significance of Festubert in May 1915 was that the 2nd Battalion did well in their attack, in fact too well. Those to their left were not so successful and that meant that the 2nd Battalion’s flank was heavily exposed. F Company, one of the leading companies, got well ahead of everyone else, lost direction and were then counterattacked from three sides and surrounded. They would not surrender and fought to the death against overwhelming numbers at close quarters. A few weeks later Lieutenant Arthur Boyd Rochfort of the 1st Battalion was in charge of a party of men working on a communication trench at night south of the La Bassée Canal. When a trench mortar bomb landed on the side of the trench he saw it, shouted to the men, dashed out from his own place of safety round the corner, grabbed it and threw it away just before it exploded. He won the VC. The Guards Division did not become fully involved in the Battle of the Somme until September 1916. Just before they did 2nd Lieutenant Grey Leach, also of the 1st Battalion, was in a building with two NCOs putting the detonators into grenades, when the fuse of one began to burn. He raced out of the door to throw the grenade away, but there were other soldiers outside. He turned against the wall of the building with it held against his stomach until it blew up and was posthumously awarded the Albert Medal in Gold, the very rare immediate predecessor of the George Cross.

The big attack on 15 September 1916 on the Somme is most remembered now because it was the first time that tanks appeared on a battlefield. As part of a much larger operation the Guards Division attacked from the village of Ginchy northeast towards Lesboeufs and in the course of this fairly successful but very costly attack Lance Sergeant Fred McNess of the 1st Battalion won the VC for his leadership and determination in a grenade battle with German counterattackers and for continuing to do so after being severely wounded himself. During the Battle of Cambrai in November 1917 in the last, unsuccessful, attack on the village of Fontaine–Notre-Dame Sergeant Jock McAulay had to take command of C Company of the 1st Battalion when all the officers were casualties and many of the men. Having steadied everyone, he carried his mortally wounded company commander to shelter, went back forward, rallied, directed and encouraged, it being hopeless to try to advance beyond where they were. He won the VC, having won the DCM four months before during the Third Battle of Ypres, and was the only Scottish policeman to win the VC during the War. When there was less than a month of the War left, though no one knew that on the ground, in October 1918 the 2nd Battalion attacked the strongly held village of St Python, astride a large stream, well east of Cambrai. They took the part of the village on the near side of the stream but could not make any impression on the far side and the site of the destroyed road bridge. Lance Sergeant Harry Wood picked up a large piece of masonry, carried it right out into the open and lay down behind it to give his men covering fire and distract the enemy. Though it did not result in their gaining a firm hold beyond it did prevent the enemy from gaining any initiative. Lance Sergeant Wood, who was not hit at all, won the VC. 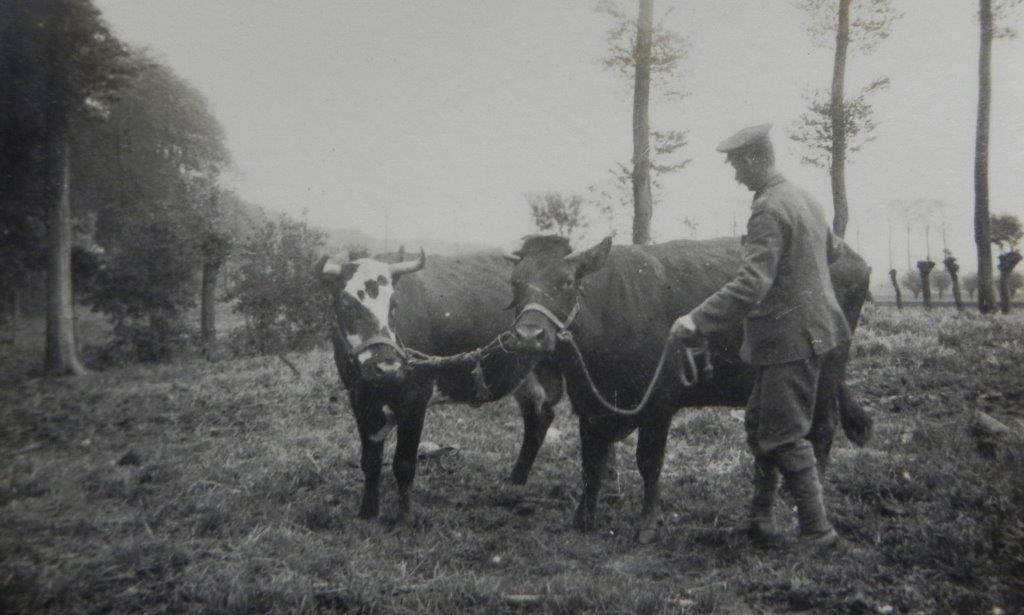 It was during this War that the nickname of “The Jocks” took hold, both among the other Regiments of Foot Guards and among the soldiers of the Scots Guards. Just after the fighting ended King George V directed that as mark of his “appreciation and pride” in services of these Regiments during the War their soldiers were no longer to be called Privates but Guardsmen. In the autumn of 1914 near where Private Mackenzie won his VC the 2nd Battalion rescued two abandoned cows, “Bella” and “Bertha”. The cows went everywhere with the Battalion from then on and eventually accompanied them home in the spring of 1919.