He was the son of Charles Henry Lyell and his wife Rosalind Margaret Watney. His father died in 1918 & he succeeded his grandfather as Baron Lyell in 1926. He was educated at Eton and matriculated at Christ Church, Oxford in 1932, graduating in 1936. Both his father and his grandfather, Leonard Lyell were Liberal MPs. Between 1936 to his death, Lord Lyell was a member of Boodle’s club in St James’s, London. He moved to his family’s estate in Kirriemuir, Angus before the war where he was a county councillor. He married Sophie Mary Trafford on 4 July 1938. They had one son, who became Charles Lyell, 3rd Baron Lyell.

Lyell was 29 years old, and a temporary captain in the 1st Battalion, Scots Guards, British Army during the Second World War when the following deed took place for which he was awarded the VC.
During the period 22–27 April 1943 near Dj Bou Arada, Tunisia, Captain Lord Lyell’s outstanding leadership and gallantry enabled his company to take its objective. On 27 April accompanied by a sergeant, a lance-corporal and two guardsmen, he led an attack on an enemy post consisting of an 88mm gun and a heavy machine-gun in two separate pits. He destroyed the crew of the machine-gun with a hand grenade and then, three of the party having become casualties, and with the lance-corporal to give covering fire he leapt into the second pit, killing several of the crew before being overwhelmed and killed. Both the guns had been silenced.

He is buried in the Massicault War Cemetery, southwest of Tunis. 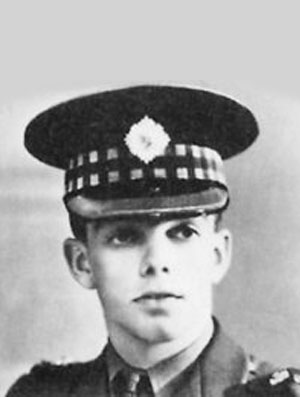