Sergeant John Simpson Knox VC (30 September 1828 – 8 January 1897) was a Scottish recipient of the Victoria Cross, the highest and most prestigious award for gallantry in the face of the enemy that can be awarded to British and Commonwealth forces.

Born in Glasgow on 30 September 1828, Knox joined the British Army at the age of 14. He was under-age, but was unusually tall, he was promoted to corporal before reaching the age of 18.

By the time of the Crimean War he was serjeant in the Scots Fusilier Guards (now called simply the Scots Guards). The British and French forces began to land on the Crimean Peninsula on 14 September 1854. On 19 September the combined forces moved off toward Sebastopol and on 20 September came the first major engagement of the campaign, the Battle of the Alma.

The Scots Fusilier Guards were part of the 1st Division, brigaded with 3rd Battalion, Grenadier Guards and 1st Battalion, Coldstream Guards, the division’s other brigade was the Highland Brigade. The division was at the extreme left of the Allied line (furthest inland), and initially in reserve to the Light Division. The two divisions halted a short distance before the Alma River, the Russians having taken up defensive positions just the other side of river. Here, on the further side of the river the British troops faced first fording the river itself, climbing the bank on its far side, then after a small amount of level ground, a further relatively low, but steep bank, and then a gradual upward slope, at the top of which the Russians had built an earthworks armed with artillery. The British contingents were ordered forward at about 14:45, the French having managed to force a crossing further downstream, near the river’s mouth. The Light Division crossed first, but were thrown into confusion by the Russian artillery, and began to withdraw. The Guards’ Brigade was ordered forward, and crossed the river. The battalions began re-establishing their ranks on the other side having scrambled up both of the banks on that side of the river. The brigadier ordered them forward without delay, and the Scots, in the middle of the Guards’ line obeyed. They began their advance, but the retreating troops of the Light Division broke their line, and some of the Scots Guards joined the retreat. Officers and others, prominent among them Knox, regained control, and rallied much of the battalion. It was this action which was the first of those for which he was eventually awarded the VC. Four other Scots Guards were also to be awarded the VC for their actions that day. In a letter to his family, he described the battle:

The scene that met my gaze was the most awful description: it made me shudder. The bodies of our opponents were so thick on the ground that for some distance I had to go on tiptoe to pass without touching … the enemy cheered, and endeavoured to drive us back; however, we stuck to them until we were masters.

He was commissioned (without purchase) into the 93rd Regiment of Foot as an ensign on 27 February 1855. On 20 April 1855 he was transferred to the Rifle Brigade (Prince Consort’s Own) as a lieutenant, and his original commission was backdated to 5 November 1854.

On 18 June 1855, Knox volunteered for the ladder party in the attack on the Redan, an attempt to finish the Siege of Sevastopol, he was struck by a Russian cannonball, removing part of his left arm. His actions that day also contributed toward his receiving the VC. His Crimea Medal shows that he also fought at the Battle of Balaclava and the Battle of Inkerman.

On 29 January 1856 Queen Victoria signed the warrant creating the Victoria Cross with the intention of rewarding acts of valour in the Crimean War.[10] Knox’s own VC was not gazetted until 24 February 1857, by which time he had already been made a Chevalier of the Légion d’honneur by an Imperial decree of 16 June 1856. His VC citation read:

[…]
2nd Bat. Rifle Brigade Lieutenant John Knox
When serving as a Serjeant in the Scots Fusilier Guards, Lieutenant Knox was conspicuous for his exertions in reforming the ranks of the Guards at the Battle of the Alma.

Subsequently, when in the Rifle Brigade, he volunteered for the ladder-party in the attack on the Redan, on the 18th of June, and (in the words of Captain Blackett, under whose command he was) behaved admirably, remaining on the field until twice wounded.

He was among the 62 men at the first presentation of the VC, made by Queen Victoria in Hyde Park, London on 26 June 1857. His action at the Alma was the earliest for which a VC was awarded to a member of the British Army—earlier actions leading to the award of a VC were carried out by members of the Royal Navy. 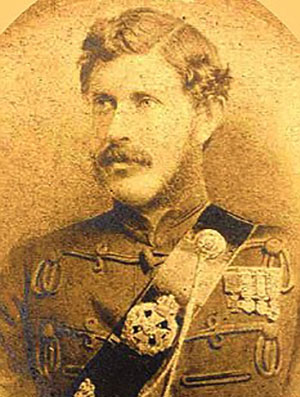