Grey De Lèche Leach was born in Streatham, London in 1894. He was a member of the Church Lads Brigade in Leatherhead.

A remarkable story of an officer who hugged a burning bomb till it exploded and killed him rather than throw it aside and risk the lives of a number of men, is told in the “London Gazette” of the 28th December, which announces that the King has awarded the Albert Medal in Gold, ”in recognition of the conspicuous gallantry and self-sacrifice of Second-Lieutenant Grey de Lèche Leach, late of the 1st Battalion of the Scots Guards.” Lieutenant Leach was examining bombs in a building in France on 3rd September, 1916. Two non-commissioned officers were also at work in the building, when the fuse of one of the bombs ignited. Shouting awarning, he made for the door, carrying the bomb pressed close to his body, but on reaching the door he found other men outside, so that he could not throw the bomb away without exposing others to grave danger. He continued, therefore, to press the bomb to his body until it exploded, mortally wounding him. Lieutenant Leach might easily have saved his life by throwing the bomb away or dropping it on the ground and seeking shelter, says the official announcement, but either course would have endangered the lives of those in or around the building. He sacrificed his own life to save the lives of others. 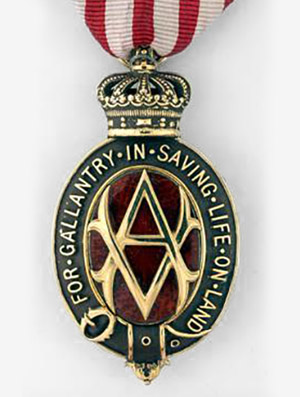